Y’all know I love to share when I find a great product! My latest find? Goli Apple Cider Vinegar Gummies!

Are there benefits to consuming small amounts of apple cider vinegar? Maybe. Studies have shown it might help control blood pressure, and it might aid in digestion. I don’t know how scientific those studies were, but according to WebMD, studies have found that drinking vinegar might help fight obesity, and one study found that “vinegar improved blood sugar and insulin levels in a group of people with Type 2 diabetes.” So believe me when I say I’m no snake oil salesman. I’m not pushing this product. I’m simply telling you that I like Goli Apple Cider Vinegar Gummies. 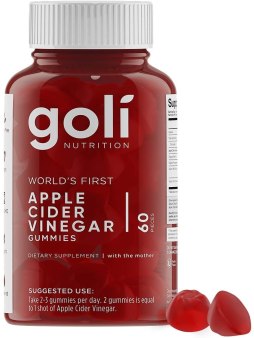 So when I was ordering some things with a friend who works in a store in LA, and he suggested the Goli Apple Cider Vinegar Gummies, I decided to try them. I told him to add two bottles to my order, and honestly, I forgot about them till the box arrived.

I opened one bottle and tried two gummies. To my surprise, they were delicious! I put the two bottles in the cupboard in my kitchen, so I could take two in the morning and two in the evening, and one bottle disappeared way too quickly! How did I go through a whole bottle in under two weeks? My husband, when questioned, confessed. I explained to him that he should have read the directions on the bottle…it’s not recommended that anyone take more than six a day, and I promptly ordered more directly from the Goli website.

Now, here’s what I can tell you…before you try any kind of supplement, you should consult your doctor. I don’t know if these Goli ACV gummies have actually helped me in any way, and I hate to jinx myself, but I can say that my gallbladder attacks have been fewer and farther between. Before you start to lecture me about the gallbladder, I should tell you I have consulted a doctor and practically begged them to remove it…to no avail. Are the gummies helping me with the gallbladder thing? I don’t know. Maybe it has a placebo effect, but whatever it is…I’m planning to keep taking the gummies!

Like I said, I placed my first order with a friend who worked in a retail store in Los Angeles. Since the store is closed right now because of COVID, I had to order from somewhere else when I started running short. I went straight to the Goli website (click here) and ordered, but after a few days, I received an email that the shipment would be delayed. I waited. And when I eventually called Goli, they refunded the cost of shipping, but they still couldn’t tell me exactly when my order would ship. So I went to Amazon and ordered there. The Amazon order arrived way ahead of the order shipped directly from Goli, but I’m well supplied for a while, since I ordered five bottles from each place! You can order from Amazon here.

So this is my way of sharing information with you about a product I love. Does it have any real benefits? I don’t know. My own experience is that my gallbladder seems less crazy. Is it because of the gummies? I don’t know, but I’m going to keep taking them. They’re so good, it’s almost like having a little treat in the morning and a treat in the evening!