When our daughter was six years old, in 2010, my husband had brain surgeries. Yes, plural…two operations that were nine days apart.

We got married in 2000, but prior to being married, we hadn’t lived in the same city. I was in Mobile, Alabama, and he was in Charlotte, North Carolina.

As soon as we were married, I moved to Charlotte into what is now “our house,” and I soon noticed he had “spells.” I didn’t know what they were, but he seemed to “lose time.”   He would suddenly start blinking hard, fidgeting, and mumbling…for 30 to 45 seconds.

I spoke with his doctor, who ran tests, and while she saw a small spot on the left temporal lobe of his brain, she wasn’t concerned.

He had a series of unexplained car accidents, always saying afterward that he didn’t remember what had happened. I knew we had to get some answers. I was angry. I wasn’t angry at him; I was angry that the doctor hadn’t addressed the problem. I called her, telling her we needed to see a doctor who could help us.

She finally referred him to a neurologist.

At the neurologist’s office, we explained everything to the doctor, who promptly told us, “He’s having petit mal seizures.” Five minutes into the appointment we had an answer.

More tests showed what appeared to be a benign tumor in the front part of his left temporal lobe.

After months of anti-seizure medications, his seizures weren’t under control. Surgery was recommended. First, he had an inpatient evaluation in June of 2010, meaning he was hooked up to external electrodes in an epilepsy ward to monitor brain activity. The hope was that he would have a seizure while there, and the epileptologist would garner useful information. After a week in the hospital, he finally had a seizure…a full-on gran mal seizure, and the doctor witnessed it.

Working with two neurosurgeons, the epileptologist scheduled surgery for that September. First, they opened his skull and placed electrodes and probes directly into and on the surface of his brain. Wires hung out of the incision while we waited for him to have another seizure, and after nine days, he did.

The second surgery was scheduled for a couple days later, and he had the affected parts of his brain removed…part of his temporal lobe, his amygdala, and his hippocampus. Afterward, he was in pain, but it soon became apparent he had very few lasting effects. His “naming center” was affected, so he has trouble recalling words or names, but the biggest loss was short term memory. It was tough at first, but we have a different normal now.

It’s hard to believe it has been eight years.

Our daughter was six years old. She had just started first grade, and while I don’t claim to be the most organized person in the world, I became even less so throughout this ordeal. God bless her first grade teachers for providing snacks, extra patience, and love.

My goal was to keep life as normal as possible for our daughter. She didn’t need to know how scary it was, and I wanted her life to continue as if nothing were going on.

Thank God for friends…people rallied to keep us going. People who lived near the hospital graciously offered to let me nap at their homes. People filled our refrigerator with meals. Family came in from out of town to help. Friends let us sleep at their houses when I was too tired to drive home.

Both operations went smoothly, and after a couple weeks in the hospital, he came home. It was a tough time for him because of the pain and memory issues.

On top of everything else, he was experiencing what the doctor referred to as “disinhibition,” a temporary effect of the surgery. It manifests in different ways, but his manifested in terrible language. Some people experience far worse types of disinhibition…they walk around naked, or become sexually promiscuous. The excessive bad language was embarrassing, but at least he wasn’t walking around naked or having sex with random strangers. Unfortunately, our daughter heard some words she didn’t need to know. Fortunately, the disinhibition didn’t last.

Photo from December 22, 2010…two months after the surgeries.

Because of the seizures, he was not allowed to drive. This was a low point. He was angry.  He wanted to drive. It affected everything. I was trying to hold everything together, but on Christmas morning, I had forgotten to put his medications in his weekly container. He came into the kitchen, and when he realized his meds weren’t ready, he became angry. When I said I would get the meds, he said I was trying to control him. It was the brain surgery talking, and I knew it, but I’d had enough.

It angered me, and I said, “You know what? Manage your own damn medicine. I can PROMISE you I won’t touch it again.” And I never touched the meds again. He had to take control of his recovery at that point. I was tired. I was tired of his anger about not being able to drive, and I was tired of being the scapegoat. Frankly, I was just tired.

The next day, our daughter and I went to visit family in Alabama. I took all the car keys with me, because I knew he wanted to drive but legally couldn’t. He called asking where I’d hidden the keys, and I told him I had them with me. He got angry, and I hung up the phone, turning it off so he couldn’t call me for the rest of the day. The next day, he apologized.

I know it was frustrating to depend on other people for transportation. I’m sure he felt trapped. He had an unemployed friend who drove him where he needed to go for those months, which worked out nicely for both of them. But it wasn’t the same as driving.

Eventually, the day came that he could drive again. I joyfully handed him the keys.

He got in the car and drove away with a smile on his face, and immediately, things got better. The anger was gone.

We had survived the storm. Most importantly, he had survived brain surgery and was making a recovery. Our daughter had survived, and except for knowing a few more choice words, she was unscathed. Time had healed his physical wounds, but time also healed our marriage. Once he could drive again, we fell back into a happy place. 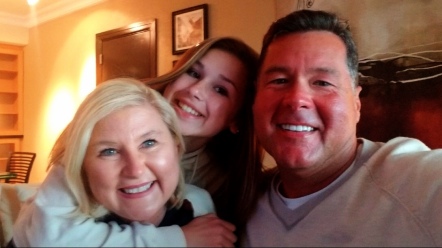 Sure, we’ve had challenges and had to make adjustments. My husband doesn’t like to travel and wants to be home more than he used to. His brain processes things differently. He gets headaches in overcrowded, loud places. He only likes to visit familiar places. He doesn’t mind that we continue to travel without him. I’ve told him before, “God put us together for a reason. Some women would be angry that you don’t want to go anywhere, and some would be afraid to go without you, so they would stay home and complain.” I’m not angry, and I’m not afraid. Because he doesn’t enjoy being on the go, we spend quality time together at home or familiar places.

A year or so ago, our now-14-yr-old daughter and I were talking about the brain surgery experience, and she asked, “Could Daddy have died?” I responded, “Yes. He could have died. You didn’t know that?” She said, “No.” I smiled and said, “Well, then I did my job. I didn’t want you to know.”

He turns 52 today, and we have settled into our new normal…lots of repetitive conversations and lots of reminder notes. It would seem strange to a lot of people, but it’s our normal…and thankfully, that doesn’t include seizures anymore.