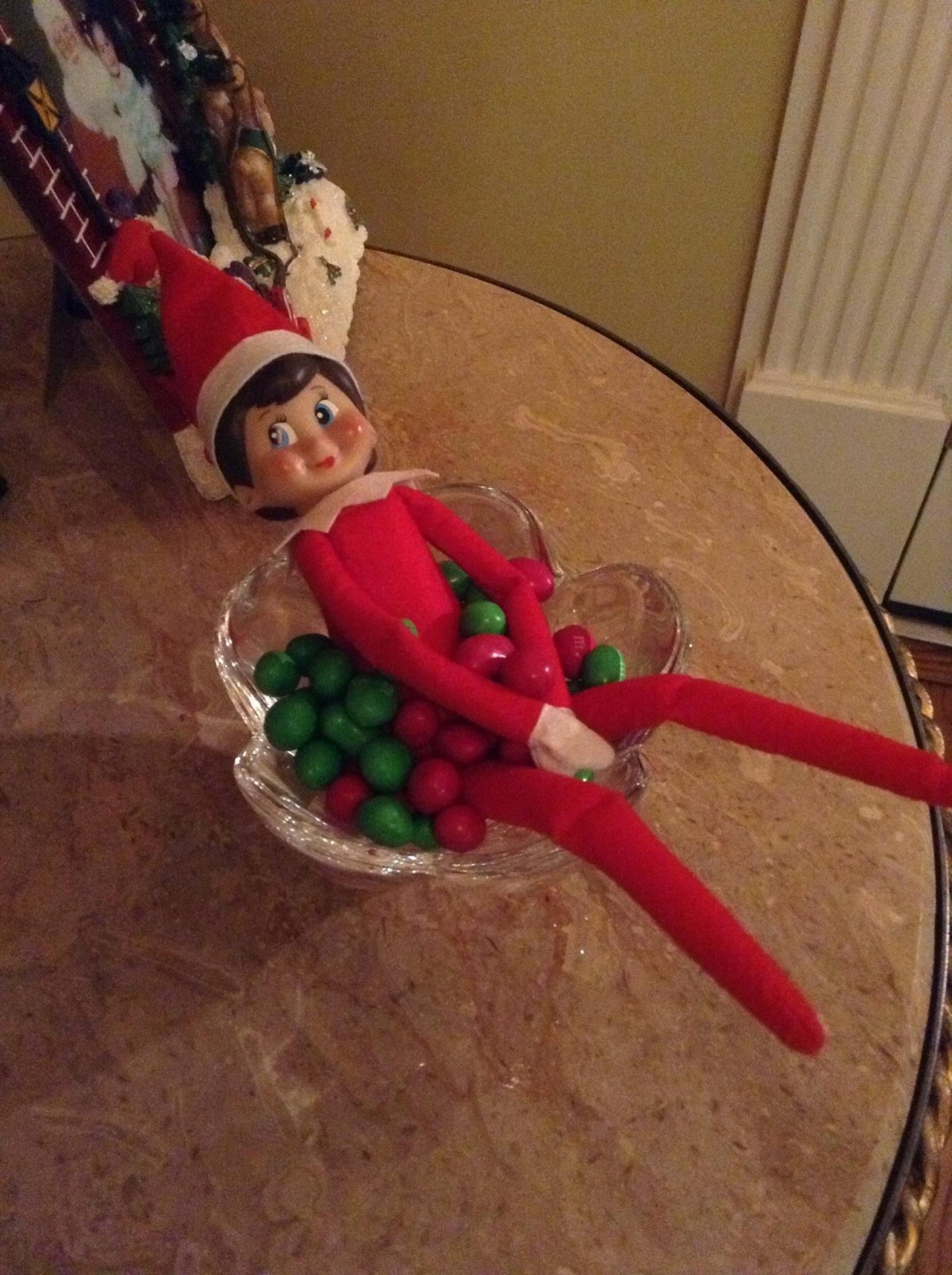 We survived the elf.

Our daughter is 17. When she was a little girl…not sure how old, maybe six or seven…”the elf” appeared at our house. You know…the elf who appears the day after Thanksgiving and stays till Santa takes him/her home with him on Christmas Eve? That elf.

“It will be fun,” my friends said, and they got elves too.

And honestly, it was fun.

For those who are not familiar with The Elf on the Shelf, I will get you up to speed. Parents of small children purchase the elf and pretend it magically appears the day after Thanksgiving…sent by Santa to watch the children and report back nightly to the North Pole. The kids are not allowed to touch the elf, because he will lose his magic. He “magically” flies back to the North Pole every night while the kids are asleep to report to Santa, and when he returns, he lands in a different spot in the house…sometimes doing something mischievous or bringing a small gift. But the big deal is that every morning, he will be somewhere different when the kids wake up, so they have to look for him in the house. At first, it’s a lot of fun trying to come up with new hiding places and new fun ideas…till you forget one night.

Imagine this: kid wakes up and walks downstairs to find the elf hasn’t moved from where he was the day before. The kid is horrified that his elf hasn’t moved and questions the parents about the authenticity of the story behind the elf. Parents have to think on their feet. I came up with this: Oh, honey, it was so foggy last night! The elf couldn’t go back to the North Pole in dense fog! Too dangerous! I’m sure he will go back tonight!

Fast forward to about 2am the next day when I woke up and realized I hadn’t moved the elf again. My pulse rate quickened, and I jumped out of bed to try to hurry up and quietly move the elf…yep, 2am. Don’t even ask how long it took me to go back to sleep.

These things happened all the time at our house. I would forget to move the damn elf and have to come up with another excuse. Here’s a list in case you need it for a future elf fail:

Seriously, even little kids will question those lame excuses, but they got me through the situation.

But having to hide one elf wasn’t enough. People gave her elves as gifts! At first, she questioned how people could just give them as gifts…she thought they magically appeared, so I had to explain…after we put him on the shelf the first night, he will get his magic during the night and fly back and forth to the North Pole. But that meant I had more than one elf to move and hide creatively.

Oh, it got more complicated. Our young child started writing notes to her various elves with questions. “Do you have a boyfriend?” “Do you have a girlfriend?” “What is your favorite food?” What is your favorite drink?” “Do you have a pet?” “Who is your best friend?” Oh, the questions went on and on, and she expected answers to every question the next morning. So, as a good mom, I had to sit down and come up with a different handwriting for each elf before I went to bed at night…and I had to remember which elf had which handwriting! Insanity…but yes, a small child would notice a discrepancy in the handwriting. Not kidding…

And to make things more complicated, she heard the elves brought gifts to some children, so of course, there had to be gifts. I went to Target and stocked up on every candy and cheap trinket I could find.

The elves had to be mischievous too. They spilled sugar or flour everywhere. They hid in candy bowls. They went ziplining between the banisters on the stair balcony. They wrote words with toothpaste. They even “came in like a wrecking ball.” I know there are some people who think I shouldn’t be proud of that one…but I’m proud of that one. One elf was sitting on an aluminum foil wrecking ball hung by yarn from our oven door…Miley Cyrus-style. And embarrassingly, our daughter knew exactly what it was. Don’t judge.

One year, at about Thanksgiving, before any elves had arrived for the season, my daughter came running into the kitchen, where I was cooking, with an elf in her hand! She had found it in my nightstand drawer and was confused. “Mommy? Look what I found in your drawer?” I’m good. I’m really good. Without batting an eye, I exclaimed, “He’s here! It’s magic! He knew you were going to look in that drawer tonight! He’s magic!” She bought it…hook, line, and sinker.

But the first year, when we had just one elf, heartbreak struck when we had our daughter’s bedroom painted. We bagged up all her “babies,” the stuffed animals she had collected over her lifetime and put them in the garage for “safe keeping” till the room was finished. No big deal…except, somehow, the bag got thrown away. The heartbreak was real when we discovered it. The tears! She was heartbroken, but I was too…so many memories. I had no idea how some of the “babies” would ever be replaced, but fortunately, I had photos of most of them. I got on eBay that night and started searching…and purchasing. I went anywhere and everywhere I could online to find replacements that night. I know…silly…but right then, it was important. And fortunately, I even had duplicates of a couple of special ones hidden away. So that night, after our daughter fell asleep, I got one of the duplicates from a trunk in the attic and propped it up with her elf for her to find the next morning.

When our daughter woke up and came downstairs the next morning…all puffy-eyed from crying so much before bed…she walked around looking for her elf. He was sitting on the sofa in the living room…with the duplicate rag doll that was identical to something that had been accidentally thrown away. When she found them, her face lit up…and she actually cried tears of joy! And so did I. Eventually, most of the babies were replaced by the elf over the course of the next couple of weeks. She really believed in her elf after that!

He was so special, in fact, that after opening gifts and having family lunch on Christmas Day, our daughter just didn’t seem herself. I sat her down and asked if something was wrong. Was she disappointed with her Christmas gifts? And she broke down in tears! She explained to me that no, she wasn’t disappointed with her gifts; she was sad her elf had gone back with Santa!

And you know what I did. I broke every elf rule. I comforted her for a while, and then I went into the kitchen and had a word with my husband, explaining to him that I needed him to go get the elf out of my nightstand drawer when I gave him the cue…and he needed to place it on the dining room table. Oh, I was thinking on the fly. I went back into the living room and told our daughter…so sweet…that since it was still Christmas Day, she could make a Christmas wish, and it might come true. Maybe she should make a wish that he would come back? I got a candle and told her to close her eyes and make a wish, then blow out the candle…close her eyes again and count to 20…slowly. While she did all that, my husband was quietly retrieving the elf and placing it in the dining room. We were breaking all the rules, but who wants to have a desperately unhappy child on Christmas Day?!?! I know…it could have been a valuable teaching moment…whatever. When she opened her eyes, I told her to see if her wish had come true. When she found that elf in the dining room, you’d have thought she had found Santa himself! We had more tears…of joy. And because it was after Christmas, we let her hold that damn elf for the rest of the day. I think he might have even slept in her bed that night. But I told her he could only stay for one more month, and he would likely stay in one place the whole time.

Whew! That was long ago. Go ahead…I get 30 lashes with a wet noodle for breaking every elf rule, but desperate times call for desperate measures. And really…was she harmed psychologically by any of it? No. Does she still believe in the elf at 17? No. In fact, a couple of years ago, a neighbor/friend posted a photo of her child’s elf that had accidentally melted when it was placed too close to a lamp. She put out a desperate plea to see if someone had an elf that looked like it. Guess who did?!?! We did! I asked my daughter if I could give it to them, and she was thrilled to get to save the day! I called my friend and said, “Come get it! It’s yours!” If you have an elf and hate it, just know you’ll get some good memories out of it. One day, you’ll look back on it fondly. And if you need some elf ideas, here are a few pics of some things we did back in the day…