It’s no secret that I love sports. I’m not a great athlete, but I’m a fantastic spectator. I love to watch lacrosse, field hockey, baseball (in person), soccer, football, basketball, tennis…I just love to watch sports.

My favorite sports are the ones in which my 14-yr-old daughter is participating. She plays middle school field hockey, basketball, and lacrosse.

However, my favorite non-daughter-participating sport is football. I love professional football, middle and high school football, but most of all, I love college football…specifically, Southeastern Conference Football.

I’ve been known to scare young children when yelling at the television during an SEC game. Unfortunately, I can’t watch all the SEC games, but I like to stay informed.

Lucky for me, there is a website, run by two young gentlemen, that caters to the SEC Football fan. It’s called Front Porch Football. To see their Facebook page (please like/follow it for updates and invite friends!), click here. You can go straight to the website by clicking here. Its creators, brothers Chris and Brendan Paschal, are the sons of my friend, Maureen, a school librarian who also has a website called Raising the Capable Student (click here…I’ll be telling you more about it in a future post).

The tagline for Front Porch Football is “We take SEC football as seriously as you do.” And they do. 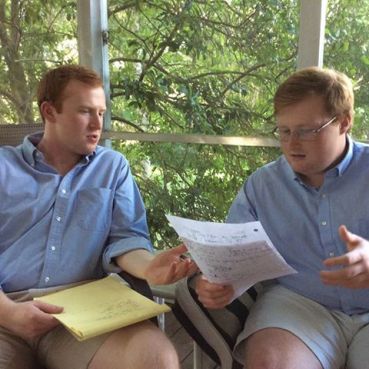 Chris and Brendan started Front Porch Football when they were both students at Wofford College in Spartanburg, South Carolina. Brendan is a senior there now, and Chris is finishing up his first year of law school at the University of South Carolina.

It all began in the summer of 2015. The idea came about while the brothers were sharing some BBQ at the Q Shack in Charlotte (see the Q Shack website here). According to the brothers, Chris was doing his usual complaining about “how the national pundits don’t know what they’re talking about” when discussing college football. Apparently, he believes pundits on radio shows should be able to answer callers’ questions. According to Chris, “Knowing who won the 1995 Iron Bowl or the latest on a 3-star prospect from Moultrie, Georgia, isn’t too much to ask.” Their mother (my friend, Maureen) suggested to Chris that they start their own website, and the rest is history.

They needed a name. Naming a website is tough. You want it to be catchy, but you want it to be relevant. Because their site is devoted mostly to SEC Football, Chris and Brendan wanted it to be authentic and Southern, but it needed to get attention. They thought, “How many Southerners out there sit on their front porch and talk SEC football?” A name was born. It seemed only natural to call it Front Porch Football.

Now that I’ve gotten all the formal stuff out of the way, I want to tell you what I LOVE about this site. First, it is informative. These guys know their stuff. Second, it is entertaining and oftentimes, downright hilarious.

They write about various SEC programs and do post-game wrap-ups, from which I garner valuable information and insight. They also started some podcasts that are usually under 15 minutes (I’m the guest in one…click here), and they’ve made videos analyzing matchups, picking winners with guest pickers, interviewing a middle-aged University of Alabama alumna (ahem!), and just talking football. I love their videos of weekly picks, because they do their homework. Usually, I have my own ideas about how a game will shake out, but often, they give me a different perspective. I only get mad if they pick against Alabama. They know not to look me in the eye if they pick against Bama. I’ll give them the wicked “stinkeye” my mother taught me. 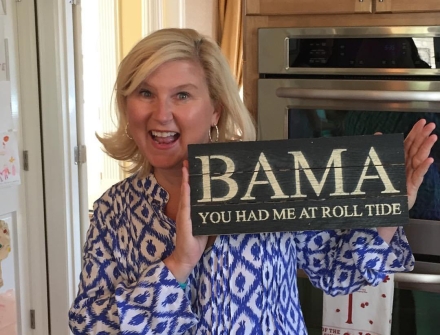 BUT what I find most entertaining are their original, hilarious videos. You may be familiar with their video that went viral on October 16, 2017. It is titled “Help a Tennessee Vol,” and it received over ONE MILLION views. In the video, with Sarah McLachlan singing “In the Arms of an Angel,” distraught Tennessee fans appear while a speaker asks viewers to be “an angel for a helpless Tennessee fan.” Of course, it’s a parody of all those ads we see all the time for helping orphaned animals. The University of Tennessee Volunteers have had a few rough years in their football program, and this past season wasn’t any better, resulting in the firing of their Head Coach, Butch Jones. Brendan saw an opportunity in the Vols’ misfortune; he created the video, and the public ran with it. (The University of Tennessee subsequently hired Jeremy Pruitt, the former defensive coordinator at The University of Alabama, and Butch Jones was hired as an off-field analyst at Alabama.)

The “Help a Tennessee Vol” video was shared on Saturday Down South and countless other SEC football sites. You can see it here.

Chris says the videos are Brendan’s “favorite thing to do regarding Front Porch Football, and he thoroughly enjoys poking fun at teams and fans.”

Other funny videos have featured “Burns the Backup,” in which the Paschals’ friend, Ryan Burns, portrays the life of a backup quarterback. I wouldn’t mind seeing him as a recurring character. You can see that video here. There are other videos featuring the brothers’ funny friends and classmates in contests naming all the SEC head coaches, complete with music from The Price is Right (click here); “The Battle of the Brothers” (in which the brothers display some really good “stinkeye” that rivals my own) before the Alabama/Georgia National Championship game (click here); and other hilarious scenarios. One of my personal favorites features the brothers in a parody of Home Alone’s “Angels with Filthy Souls,” retooled as “Playoffs with Filthy Bowls” (click here). Clearly, I enjoy the videos. They are good…really good. You can see ALL their videos by clicking here. 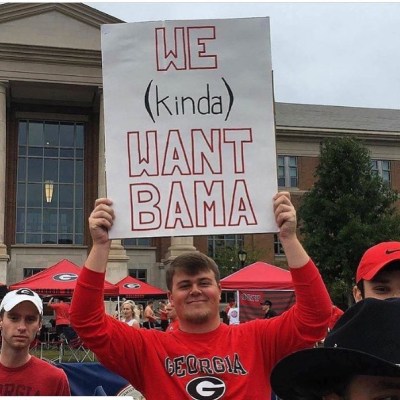 And I can’t forget the polls they have on the site’s Facebook page. Recent polls have asked followers, “Which is the real Death Valley: Clemson or LSU?”(LSU won) and “Better Rivalry: Iron Bowl or UNC/Duke Basketball?” (That last one was a close one. Iron Bowl won, and I might or might not have had a hand in making sure the Iron Bowl won.)

I’ve known these gentlemen since long before Front Porch Football was even a thought. They are hardworking, clever, witty, and they come from a nice family…have to make sure you know that! In talking with them about the website recently, I asked them what their goals are for Front Porch Football.

They didn’t hesitate. They want to “establish a strong fan base that ranges from the hardcore fanatic to the casual fan to the Grandma/wife/brother who doesn’t know much about SEC football.” They know there are people who just watch the games and people who live for the games. There are fans who watch it because there’s nothing else to do, and then there are the fans who, on any given day, might be re-watching a game from the 1980s, with the late, great Keith Jackson (you remember him, “Whoa, Nellie!”) commentating. They want all these people to follow their page/site and contribute their opinions and comments. They want everyone to become engaged in the discussion.

They say they created Front Porch Football for the fans, so their other big goal is to provide fans with a platform to voice their thoughts about SEC Football. They say they will be making some exciting changes this summer to the site to get more fans involved. I can hardly wait!

Down the line, they’d like to expand their brand and product, “especially into the apparel market.” As students, they know money doesn’t grow on trees, so they’d like to bring some quality apparel to the market at an affordable price. Actually, Chris’s words were, “Of course, each school has their own swag, but it feels like you have to sell a kidney to buy a decent shirt.” The apparel is a longer range goal. Personally, I’d love to own some apparel from my favorite sports website. I’ve already told them I’m first in line when they get some t-shirts out there. 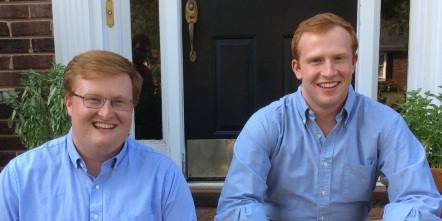 If websites could have cheerleaders, I’d cheer for this one.

***If you like the videos you watched through my links, please go to Front Porch Football on Facebook and like/follow their site. ALSO, please share this story in support of these guys and invite your friends to follow them as well!***