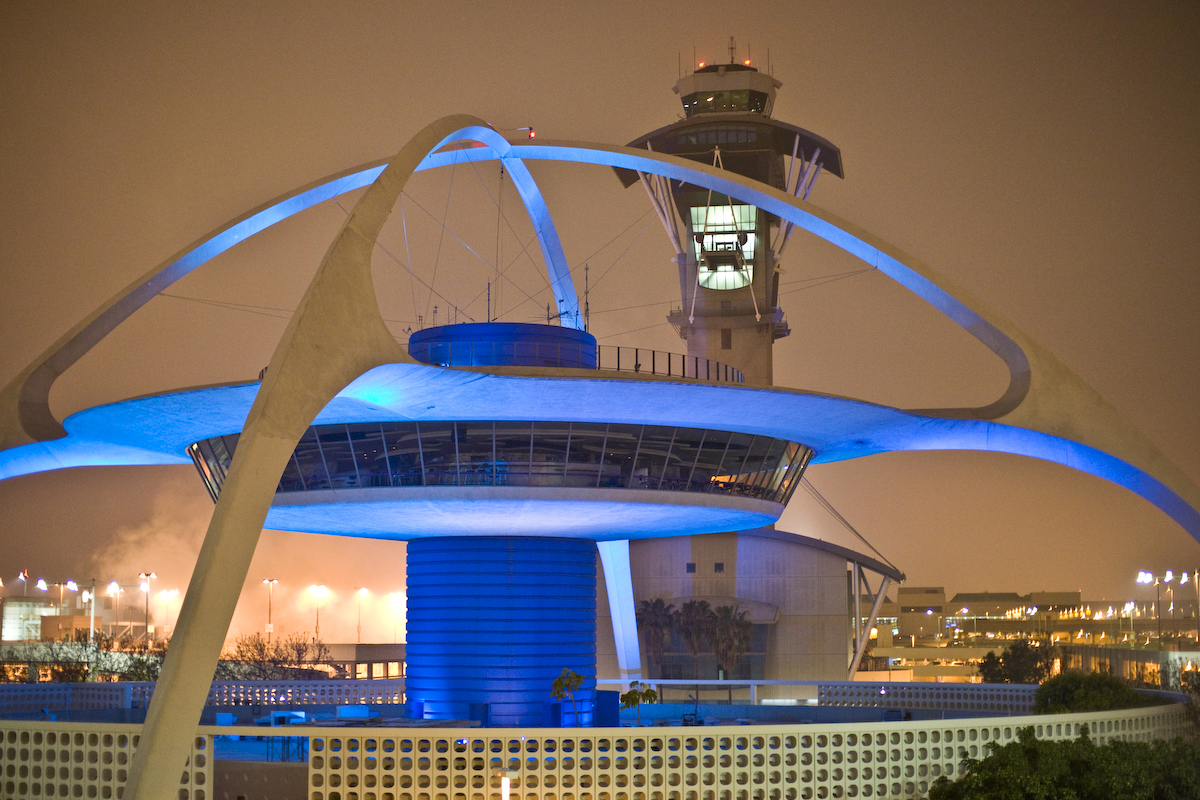 Think Mad Men or even The Jetsons. If you ever watched Mad Men, you remember some of the cool building designs of the era. I’ve seen examples of them throughout my life, but I never had a name for them until now…Googie, which is defined on Wikipedia (not a great source, but fine for this use) as “a type of futurist architecture influenced by car culture, jets, the Space Age, and the Atomic Age.” It started in Southern California in the 1930s and spread throughout the nation through the 1970s. I have always been fascinated by Googie architecture, but I just didn’t know what it was called! Now that I know, I’m searching for Googie influences everywhere!

I’ve seen examples in the Los Angeles area, where the style can be seen in lots of places, most notably at Los Angeles International Airport (LAX). One of the most iconic examples of Googie is well-known, the Theme Building, that futuristic building at the airport that looks a bit like a space ship. (See featured photo at top.) I remember seeing it the first time I visited LA in 1989, and every time I go now, I take a picture of it as soon as I see it. If you’ve ever flown into LA, you’ve likely seen it. If not, you’ve probably seen it in movies and TV shows like California Suite and Mad Men. When you see it in a show or movie, you know the location is LA.

There are lots of other easy-to-find examples in the LA area: the Union 76 station at the corner of South Santa Monica Boulevard and North Crescent Drive (another favorite); Pann’s Restaurant on La Tijera Boulevard; Norm’s Restaurant on La Cienega; and Mel’s Drive-In in West Hollywood. And another favorite in the area is the Avalon Hotel in Beverly Hills. Originally, it was the Beverly Carlton, but was rebranded as the Avalon a few years ago. See photos:

When I was a little girl and lived on the Eastern Shore of Mobile Bay in Alabama, there was a place nearby that was an interesting example of Googie. It was called Pineda Island Recreation Center, and by the time I came along, it was defunct, but the Googie “ruins” are still standing. It was a recreation area built around two pools, an Olympic pool and a diving pool. The pools were encircled by Googie covered areas that created shade for guests. It opened in 1960 but closed soon thereafter, due to financial issues, from what I understand. When I lived near there in the 1970s, I found the area fascinating, because of its futuristic look. In fact, I still find it fascinating. The slideshow below (from arctic.edu) shows the rendering by the architect, Bertrand Goldberg. It also shows shots from the center of the structure, one when it was open and another current one of the “ruins.” You can also see a current shot from above the area from Google Earth.

Also, in the 1970s in downtown Mobile on Government Street, there was the Admiral Semmes Motor Hotel, another building I admired. It has long since been demolished to make way for progress, but back in the day, it was a cool building. Of course, motor hotels are now a thing of the past. Chances are, if you can remember the old Howard Johnson’s motels and restaurants, you saw an example of Googie-style architecture there too.

Yes, I’m completely obsessed now. Everywhere I drive, I’m looking for examples of Googie. Feel free to share your photos with me and tell me where I might see some interesting Googie architecture.