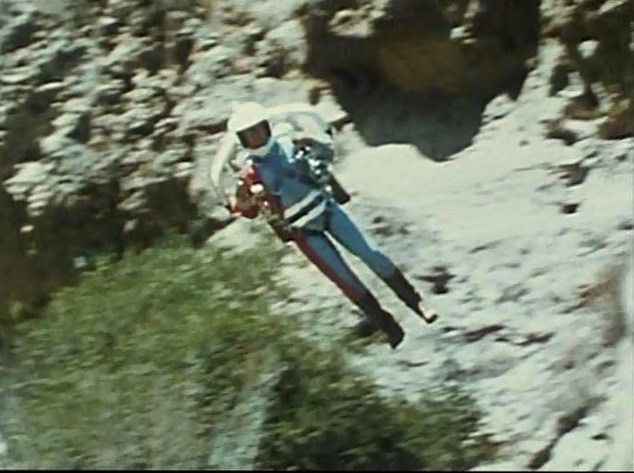 Who wants a jetpack for Christmas?

Yes, it’s a little early to be thinking about Christmas. However, I remember how I would start making my Christmas list for the next year as soon as it was over. I don’t do that now, but there are some things I’ve always wanted that were far out of reach. I’d love to hear other people’s wish lists.

-Jetpack. On the news recently, there was a story about two airline pilots reporting someone flying near them with a jetpack on their approach for landing at Los Angeles International Airport. I was intrigued. I have always wanted a jetpack…since seeing one in the opening credits of the short-lived 1970s Saturday morning live-action show called Ark II as a child. If you don’t remember the show, I’m not surprised. I have mentioned it to various people over the years, and not one other person has ever remembered it. It’s a Mad Max-type show that was aimed at kids during the CBS Saturday morning lineup, and I must have been the only kid who enjoyed it. (You can watch an episode on YouTube here.) But like I said, in the opening credits, there is a guy flying with a jetpack. In fact, the lead actor, who is the captain of the ark, is the guy who portrayed the original Jack Abbott on The Young and The Restless. His name was Terry Lester. Unfortunately, he died in 2003 from a heart attack at the age of 53. But back to Ark II. Yes, people can fly in jetpacks, but there aren’t that many of them out there, and according to a company in Australia, you can purchase them for $250,000. As unbelievable as it seems for people to be flying around today, imagine how unbelievable it was in 1976! I wanted one then (I was nine years old), and I still want one now. How incredible would it be to just put on a jetpack and go where you want to go? I could get errands done a lot faster! Or I could just fly over the city. I have regular dreams about that, but we won’t get into the Freudian meaning there. Years ago, my friend, Mary Ann, called me telling me her young son was trying to tell her what he wanted for Christmas, but she couldn’t understand him. He had endured lots of ear infections, so he didn’t always pronounce words clearly. I asked, “What is he saying?” She was standing beside him and asked him to tell me what he wanted. He said, “Et pat.” She put the phone back to her ear, and I said, “He wants a jet pack.” She turned to him and asked, “Are you saying you want a jet pack?” He got excited, because finally she got it! He is a teenager now and speaks as clearly as anyone else, but at the time, Mary Ann couldn’t believe I knew what he had said. “How did you get ‘jet pack’ from ‘et pat’?” I said, “Because I always wanted a jet pack when I was a kid too.” In fact, I still want one.

-Flying Car. You’re likely beginning to see a theme here, but my flying car is not like what you see on The Jetsons. Mine is more of a short-distance, low-flying car that can get over traffic. I’ve thought it all out when I’ve been behind a slow car in the passing lane (that’s the left lane, for those who don’t know it), wishing I could pull back on my steering wheel like an airplane throttle. I have actually thought this through. The flying cars wouldn’t be long distance flyers. The flying ability would be for only short distances, enabling the car to get over slower cars. In my mind, these flying cars would require operators to obtain a special license issued by the FAA. Part of the license testing, aside from normal operations, would include safety…knowing how to look for overpasses and power lines ahead. So, if you ever see me stuck behind a slow car in the left lane, you can know that, at that very moment, I am dreaming of my flying car. I don’t think Santa can help me with this.

–Vaccine. Of course, I want a safe vaccine for this stupid coronavirus! I want us all to be able to resume life as we know it. I want to be able to hang out with friends. I want my daughter to be able to play sports. I want college students to be able to enjoy the college experience…going to classes instead of remote learning, going to football games, socializing. I’m thinking I should move “vaccine” to the top of my wish list. I actually created a meme about this a while back showing Cindy Brady from The Brady Bunch on Santa’s lap. Remember the episode? Carol Brady had laryngitis, but she was supposed to sing a solo at church on Christmas. Cindy was brokenhearted that her mother might now be able to sing and told Santa all she wanted for Christmas was for her mother to get her voice back. Long story short…it was a Christmas miracle! OK, so it wasn’t a miracle, but Carol’s voice returned in time for the solo, and Santa got all the credit. Maybe we should all take the time to go sit on Santa’s lap and ask for a vaccine?

Obviously, I’d love to have cures for lots of diseases. I’d love to have world peace. Those are obvious. I’m sure there are more things I’ve thought about over the years, but for today, they’ve slipped my mind. Maybe you have some of your own “interesting” things on your wish list?