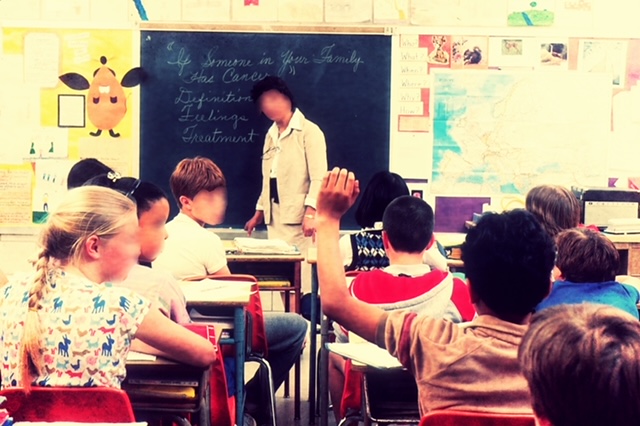 The loss of a beloved teacher.

When I was growing up, my family moved several times. In fifth grade, I landed in a new town and new school. It was a school that was several times bigger than my previous elementary school. At my “old” school, we had only two classes for each grade. Everyone knew each other, and we were a pretty sheltered bunch. At my “new” school, there were four or five classes for each grade. Everyone did not know each other, and well…they weren’t as sheltered. Fortunately, I fell into the classroom of a wonderful, caring teacher.

I feel pretty sure she could feel my pain on the first day. While everyone was friendly, I’m sure I looked like a deer caught in the headlights, so my new teacher assigned two girls to look out for me. They showed me around and introduced me to their friends, and it certainly made the transition easier. Assimilating wasn’t difficult, thanks to the teacher and those girls she introduced me to.

There was something special about this teacher. She was dealing with students from various socioeconomic backgrounds and races, and somehow she brought us all together. I don’t know how public schools work in Alabama now, but back in the day, students were grouped by reading level and math level. We had at least two different levels in our class at any given time, except math, when we went to a different classroom where everyone learned the same thing. In some cases, I’m sure students who weren’t working on the highest level might have felt inferior, but I don’t think they ever felt that way in her class. She loved all of us, in spite of and because of our differences. And while I was in the highest level reading group, I know we never looked at the other groups in our class and thought they were “less than.” That’s because our teacher pulled us together. She understood that fifth grade students needed to move around some during the day, and she encouraged us all to participate in discussions, be creative, and work with our “neighbors.”

I had always been a good student, but I had usually been pretty quiet in class. But at the end of the first grading period, the teacher called my mother before sending home my report card. She wanted to warn my mother ahead of time that she had marked “talks too much” on my report card, but she explained that she had done it for our whole group that sat in the same area. Apparently, we had bonded well enough that we never stopped talking! My mother was surprised but thought it was funny, since she had never been told I “talked too much” at school. And we, the students, learned a valuable lesson about working as a group…everyone in the group is responsible for each other.

One of those friends, James, from that class group texted me recently. He is my longest continuous-contact friend, and we were brought together right there in that classroom. We have been friends for 43 years. He texted me to tell me our beloved teacher had passed away. He loved her too. In fact, he was, quite possibly, the student who checked in on her the most over the years. She saw something special in him when we were in 5th grade, and he didn’t disappoint. He remembered her kindness and spent time with her when she was in the hospital several years ago, and then, last year, he visited her at home…spending time laughing and talking with her.

The last time I spoke with our teacher was Mother’s Day weekend in 2019…just over a year ago. We talked about old times. We talked about how she let us veer from the lesson plan sometimes to give us time to be creative. She sometimes secretly gave clothing and snacks to the students who needed it…but in a way no one else knew it, so the student wouldn’t be embarrassed. We talked about how she became a teacher. We laughed a lot while we reminisced, and we solved some of the world’s problems in that phone call. She reminded me of a few things, and I reminded her of a few things. And she asked me to write down some of my memories of her/her class and send them to her.

She taught my brother two years after she taught me. We are two totally different personalities; frankly, he’s a lot more fun than I am. And I’m sure he was quite the class clown, but this teacher? She had an appreciation for his humor. She found a way to teach him without squashing his spirit. She saw something special behind his twinkling, mischievous eyes, and she loved him. He loved her too.

When I heard about her passing, I was heartbroken. I knew her health had been in decline, but I was surprised to hear she had passed. I was, however, happy I had followed through on my promise to write down some memories and send them to her. It took me a few months to get it done, but I got it done. I emailed it and then sent her a hard copy of it too. A friend was having coffee with me at my house when I got the news, and I told her, “Wow. My fifth grade teacher just died.” I went on to explain to her how special this teacher was to all her students…how she actually cared. And then I said, “I’m so glad I talked to her last year and sent her some memories I had written down for her.” No regrets.

She was a lovely lady, and “lovely” is high compliment from me…one I don’t throw out lightly. God bless her family, and God bless the soul of Mrs. Stiff.