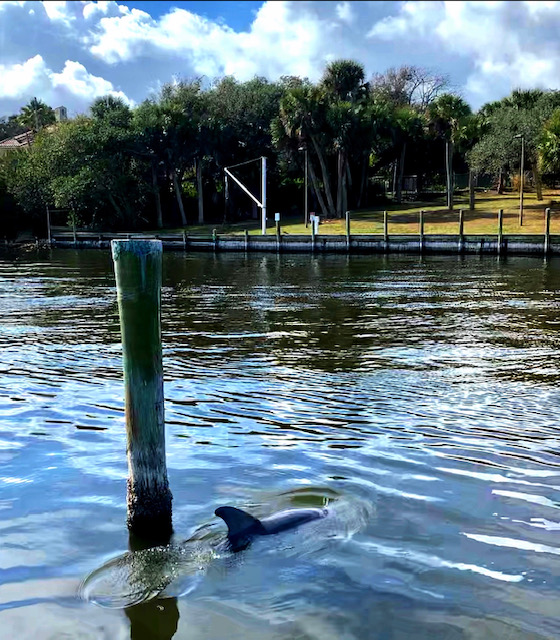 *I’m writing about this trip so I can remember details later. Maybe you will learn something new!*

Two friends on the road, part 4.

So we left Miami…we didn’t want to, but we needed to start traveling in the direction of home…north on I-95.

At some point south of Vero Beach, we dropped off I-95 to get put gas in the car and buy more lottery and scratch-off tickets. We we were looking for manatees again…trying to find a them in a marina or inlet. We were obsessed. Well, I was obsessed. Mary Ann might have been humoring me, but I wanted to see more manatees. Using her internet search skills, Mary Ann found a place we might be able to see manatees near a power plant in Vero Beach. We found the power plant; we also found out quickly the road to the power plant was blocked. We got creative. Looking at the maps on our phones, we saw where the canal passed through a neighborhood. We went there. It turned out to be a canal behind an apartment complex, but we parked in the parking lot and walked down to a dock on the canal. It was dark, and I was paranoid about trespassing. Darkness + water + trespassing = fear. I kept whispering, “I’m scared.” After a little while we didn’t see anything and didn’t hear any manatees surface, so we left. Whew! I ran to the car.

Soon after leaving Vero Beach, we both said we were hungry at the same time and made our way toward Melbourne. Mary Ann found restaurant info, and we made our way to downtown…a charming area! We couldn’t believe our good luck…lots of restaurants, live music, and cute shops!

We passed a place called 716 East on Main Street, and it looked great…outdoor seating, twinkling lights, and live music. After parking, I checked the online menu and saw Mary Ann’s favorite, eggplant parmesan. It’s hard to find good eggplant parmesan, so she was psyched! We looked a little rough, having been in the car all day…both of us had on hoodies…very casual. As we approached the restaurant on foot, we realized we were underdressed. I even gave the hostess an out by acknowledging we likely didn’t meet the dress code. She smiled and seated us at the front of the restaurant…not hiding us…so I guess our attire was acceptable!

The cutest waiter came over enthusiastically and took our drink orders. He then wanted to make us aware of the menu items that weren’t available. We were there late, so we understood. I almost said, “As long as you aren’t out of eggplant parmesan, we’re good,” but I didn’t. He pointed to a couple of appetizers and told us about a couple of other dishes they didn’t have. As he pointed to the menu, I realized the restaurant wasn’t 716 East anymore. It was a different restaurant altogether, called Ember and Oak…a steakhouse with no eggplant parm! Mary Ann realized it at about the same time; I could tell by the look on her face as she scanned the menu. As soon as our waiter went to get our much-needed cocktails, we laughed and said, “It’s a different menu!” Thank God I didn’t make my remark about eggplant parm to the waiter!

Sometimes things fall into place. That’s what happened at Ember and Oak. Our waiter guided us in ordering, and we enjoyed a great meal in a lovely atmosphere. And the dessert? Cheesecake stuffed doughnut holes??? They had me at “cheesecake.” For more info on Ember and Oak, click here.

I booked a hotel reservation from the restaurant, so we went straight to the hotel and dragged our stuff in. Inside, we did our scratch-off tickets…a silly ritual at this point. At bedtime, I realized I had left my restless leg meds in the car. I was afraid to go to the parking lot, and Mary Ann was falling asleep, so I thought, “Surely I will be able to fall asleep.” About 30 minutes later, I realized I was wrong, but Mary Ann was asleep, and there was no way I was running into a dark parking lot alone. I didn’t sleep…at all…maybe dozed here and there…but tossed and turned. At 6:30, Mary Ann said something, and I said, “I haven’t slept all night.” She said, “I know.” Eek. Note to self: remember restless leg meds.

We got an early start the next morning and drove to a manatee observation area in Melbourne. No luck, but we saw dolphins frolicking across the way, so we drove over and watched them. Mary Ann spotted a manatee swimming into the inlet, even though he stayed mostly submerged…we could see his “wake” as he slowly swam in. We were way too excited about the dolphins and manatee. We laughed at how embarrassed our kids would be if they were with us! But they weren’t…and we didn’t care what anyone thought!

Leaving Melbourne in the afternoon, we got back on the interstate and continued driving north into South Georgia, where we saw a feral black boar on the side of the interstate! I saw it as we passed and said, “What was that?!” Mary Ann said, “It was a wild boar!” I have to say that was the first feral boar I have ever seen in person…and I’ll be OK if I never see another one. I had an uncle who used to hunt them, and I remember hearing stories about how aggressive and vicious they can be. I still can’t believe we saw one on I-95.

We stopped for the night in Savannah, because traffic was backed up on I-95 for 15 miles. We didn’t have the patience for that. We got up the next morning knowing we would go back to Charlotte after one silly destination: South of the Border!

Not familiar with South of the Border? I have written about it before…read about SOB (South of the Border) here. It’s a roadside attraction in South Carolina, on I-95. Mary Ann had never seen it. It was a rainy, dreary day, so I hate she saw it that day. The gray skies made it look bad. It’s more fun to approach it at night, when the neon’s glowing. The dim light hides the wear and tear. We arrived, and I think she was underwhelmed. We took pictures with some of the landmarks…the giant sombrero, the giant Pedro, the neon SOB sign. We shopped in the souvenir shops and found trinkets. Two things got Mary Ann’s attention: the jackalope statue and Blenheim’s Ginger Ale. As we were leaving SOB, she spotted a giant jackalope statue, which she found especially funny…and had to climb up for a photo sitting on his back. She’d hunt me down and kill me if I posted it, so you’ll never see it. On our way out, we stopped at the SOB gas station for a bottle of Blenheim’s Ginger Ale. If you’ve never had Blenheim’s, it’s real ginger ale…with a kick. Blenheim has been making it the old-fashioned way since 1903. You can read more about it here. I knew Mary Ann would love it.

We left SOB and headed back to Charlotte, and once we arrived, we drove straight to Ilios Noche, a restaurant I knew Mary Ann would love! In fact, it has been a week since we were there, and she is still raving about it! For info on Ilios Noche, click here.

We made great memories…and that’s what it’s all about! The journey is the destination!