Last week, I had planned to watch Rudolph the Red-Nosed Reindeer with my teenage daughter. It didn’t work out. I don’t remember what we did instead…maybe I took her to a high school basketball game? Instead, I recorded it on the DVR, and I had not had the opportunity to watch it till this morning.

I was home alone. My husband had dropped off our daughter at club lacrosse tryouts before going to the gym, so I sat in my warm bed on a rainy morning and watched Rudolph the Red-Nosed Reindeer. I even turned off all the lights in my room to create some darkness (it was cloudy outside too!), so I could watch it the way we watched it when we were kids. Back then, in the 1970s, we would lie on the floor in front of the big, console Zenith television…not too close, because well, we had been told we might start to glow in the dark if we sat too close to the TV. Mother and Daddy turned off all the lights in the family den, and we watched Rudolph in our pajamas. 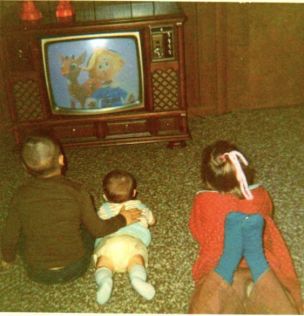 And for about an hour this morning, I was five years old again. Every character brought back memories…Rudolph, Clarice, Hermey, Burl Ives, the Abominable Snowman…ahhh…the good old days. Remember the days before VCRs and DVRs? We had to watch the Christmas specials when they came on once a year, or we had to wait till the next year. Remember looking forward to all your favorite Christmas specials?

Oh, I had favorites, Rudolph the Red-Nosed Reindeer being at or near the top of the list. I also loved Frosty the Snowman, The Year Without a Santa Claus, and Santa Claus is Coming to Town. As a teen, I fell in love with classic movies: Miracle on 34th Street, It’s a Wonderful Life, and Holiday Inn, and I would stay up late at night, watching them with my mother, because for some reason, TBS always ran those movies late at night.

As for watching Rudolph the Red-Nosed Reindeer as an adult…I don’t care what they say…for one hour, I was a little girl again…right up till the end, when Santa and the reindeer land on the Island of Misfit Toys.

As soon as Santa and the reindeer, led by Rudolph, landed on the Island of Misfit Toys on Christmas Eve to pick up the misfits, I cried. I will admit it. I cried. I cried, because I remembered exactly how magical it was to watch it when I was five. I remembered how exciting it was to see Rudolph, having been banished from the reindeer games, leading Santa’s sleigh through the fog….landing safely to pick up the Misfit Toys. And then the beautiful take-off! Wow! Rudolph had overcome adversity, and back in the day, every kid in the Eastern and Central time zones cheered him on simultaneously. We were all excited that Rudolph had saved Christmas!

And we were believing that Santa really did visit every household in the whole world in one night. After all, the North American Aerospace Defense Command, NORAD, an “official government agency,” tracked the sleigh’s whereabouts, reporting to local television and radio stations, who then passed on the information to all the children who were having trouble falling asleep. That was proof that Santa existed!

As kids, we all wondered what Santa’s take-offs and landings looked like, and Rudolph the Red-Nosed Reindeer showed us how spectacular they were! As I watched this morning, I remembered, and so yes, I cried. As we get older, life loses some of the “magic,” but don’t let anyone tell you it’s not possible to feel it again for a little while. Don’t believe me? Sit down in a quiet, dark room, and watch it. You’ll see…

You know Dasher and Dancer, and Prancer and Vixen…