When I was in college at The University of Alabama, way back in the 1980s, I fell in love. While I enjoyed dating, I was introduced to something I’d never had before…Buffalo wings, and it was love at first bite. 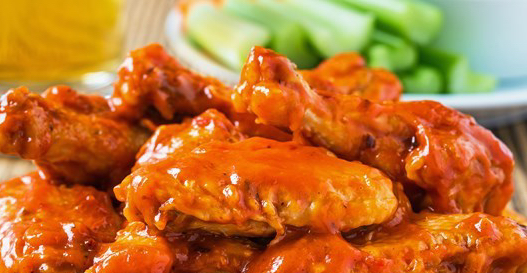 I don’t remember hearing about Buffalo wings when I was growing up, but then I didn’t spend a lot of time in the Buffalo, New York, area. In fact, I never went to Buffalo till I was an adult.

So, when I started college, I’d never heard of the spicy chicken wing. I learned about it soon after I arrived, though, and I never looked back. How could I have been missing out on that wonderful flavor my whole life?

According to the website for the Anchor Bar in Buffalo, New York, the original Buffalo wing was served at their restaurant in 1964. The website says, “On March 4th, 1964, Dominic Bellissimo was tending bar at the now-famous Anchor Bar Restaurant in Buffalo, NY. Late that evening, a group of Dominic’s friends arrived at the bar with ravenous appetites. Dominic asked his mother, Teressa, to prepare something for his friends to eat. They looked like chicken wings, a part of the chicken that usually went into the stock pot for soup. Teressa had deep fried the wings and flavored them with a secret sauce. The wings were an instant hit and it didn’t take long for people to flock to the bar to experience their new taste sensation. From that evening on, Buffalo Wings became a regular part of the menu at the Anchor Bar.” You can order online from Anchor Bar, and they will ship Buffalo Wings to you anywhere in the United States. Click here to order.

So, the first place I had Buffalo wings was far from Buffalo, NY. The first wings I had came from a little place on The Strip (a few blocks along University Blvd) called Wings & Things.

We would decide what time to order, and one of us would pick up the phone, a landline since it was pre-cellphone days, and call Wings & Things…a number we didn’t even have to look up. We even knew what our total would be. When it arrived, we would run downstairs, pay the delivery guy, grab the boxes, and hurry back upstairs to Angela’s room to enjoy our wings. Why the rush? Well, if anyone else on the hall saw us with wings, they would want one or two, and as far as we were concerned, wings were “no-share items.”

We always locked the door and sat in the floor to enjoy our wings.

Even with all the rush, the wings were aromatic, so after a few minutes, we would hear someone in the hall, saying, “Who has wings?!” We would look at each other, wide-eyed, and giggle silently, but we never answered. People would even knock on the door, and we would pretend we weren’t there…sitting silently, enjoying our wings. Because we ordered them “extra wet,” we always wore old clothes we didn’t care about, because we knew that orange-colored “wing juice” would drip and run all down our arms while we ate.

After we’d had our fill of wings, there were usually a few left. We had a ritual for that, too. One of us would pick up the landline phone again and call our friends, Lisa and Angie, down the hall, saying, “We have leftover wings. Want them?” In about two seconds flat, we’d hear footsteps coming down the hall. We would unlock the door and hand them the styrofoam boxes containing a few wings, and they would run back to their room and lock the door to enjoy the leftover wings.

Ahhh…the memories. In 1992, Wings & Things became Buffalo Phil’s in Tuscaloosa, so you can still get them if you visit. Since then, I’ve actually had wings in Buffalo, New York. I don’t know if they were from Anchor Bar or not. I was working as a flight attendant right after college graduation, and on a quick turnaround flight to Buffalo, the captain called ahead and ordered Buffalo wings to be brought to us on the plane between flights. I’m not gonna lie. They were good. They were darn good. I see there is an Anchor Bar in the Buffalo Airport, so maybe they were from Anchor Bar. I need to place an online order and try them again!

Now, whenever Angela and I get together, we almost always have wings. Since the 1980s, places that serve wings have popped up all over the country. I almost always order them the same way I ordered them in the 1980s, but Angela varies her order a little. Sometimes she’ll get different flavors, depending on where we are, but we still love our wings.

I guess when we’re old and living in the same senior living facility (my husband will be there too), we’ll have the same Sunday night wing tradition. For now, though, Angela lives in Montgomery, Alabama, and I live in Charlotte. We have favorite wing places in and around both places, so we’ll be OK. I don’t think any of the places deliver, so I’m hoping UberEats or Postmates will still be delivering food.

Here are some of our other favorite places for wings: