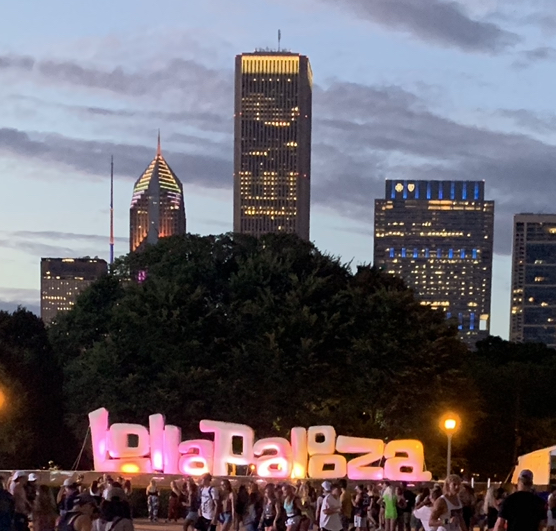 It’s the 50th anniversary of Woodstock. My husband and I watched a documentary about it recently and loved it. When naked people were swimming and bathing in the lake, I turned to my husband and said, “Just think…those people are someone’s grandparents now. Imagine watching this and seeing your grandparents!”

I was far too young to go to Woodstock, but I remember seeing lots of “hippies” around when I was a kid in the 70s. When I was around five, every time we saw a “hippie,” we would flash them the peace sign. It seemed like the thing to do.

I just got back from Chicago with my daughter. She and a friend wanted to go to a YouTuber concert just outside the city, in Palatine. The concert was scheduled for 11am Saturday, and it was scheduled to end at about 4pm. When she first asked, I said, “No.” But as it got closer to August, I started thinking about it again. My daughter started field hockey tryouts today, so if I took her to the YouTube concert, it could be our last hurrah of the summer. And I bought the tickets, booked the airline tickets, and made hotel and rental car reservations. She was thrilled.

We arrived in Chicago late Friday afternoon, and at the rental car counter, I heard lots of chatter about Lollapalooza, a huge music festival that was going on in Chicago while we were there. I hadn’t even realized it was happening. The girls didn’t dare ask me to take them for any number of reasons…we were staying outside the city; they didn’t want to look a gift horse in the mouth; and I’m sure they thought I would say “no.” We got our car and made a few stops on the way to the hotel. I had booked two rooms; sharing a hotel room with two teenage girls is no fun. But when I got to my room, I quickly got online and looked for tickets. I purchased three one-day tickets for Saturday from StubHub, a trusted resale company, and I got a surprisingly good price. You only live once, right?Then I picked up my phone and called my daughter in their room, saying, “Tomorrow, after you get out of your YouTube thing, we’re going to Lollapalooza. I just got us tickets.” She gasped. “What?!?! Really?!?!” She told her friend, and they squealed with delight!

So Saturday, while they were at their first event, I drove around looking at sights and  had lunch with a friend who had moved from Charlotte to Chicago years ago. We met at a place called Mother Clucker’s Kitchen(who knew people in Chicagoland could cook good collard greens?!?), and we laughed and talked, and she told me how to take the train from Palatine into the city…and back. And as soon as the girls were finished with their event, we did just that…took the train into the city.

When we arrived at Grant Park, I thought it was a little overwhelming…the sights, the sounds, the people! But the girls were completely unfazed. They hit the ground running, telling me they were going to see Lil Skies at the Lakeshore Stage. What?! Huh?!? But they were gone! I looked on the directory and found the Lakeshore Stage and headed that way. To get to it, I had to walk over a slight hill, and when I did I was amazed. There was a sea of people standing in front of me! I couldn’t believe my eyes! At first, I thought I’d never seen so may people in one place, but then I realized I had…in football stadiums, but never just out on a flat surface. It was incredible that so many people were standing together, singing the same song, waving their arms at the same time as Lil Skies.

After Lil Skies played, I found the girls (thank God for cellphones), and we went to a merchandise stand together, where we shopped, regrouped, and setting up a meeting point and meeting times. They told me which stages they were going to and which artists they wanted to hear, and I sent them on their way. But first, I made sure their phones were charged, and if they weren’t they had to take a portable charger (I always carry one).

I wandered between stages. I listened to different artists. I talked with folks around me…from Deerfield, Illinois; from New York; from South Carolina; from Alabama (the Tua Tagliavaloa jersey was a conversation starter); and a family from California. I watched people dance. I checked out the food vendors but didn’t get anything. I enjoyed the crazy wardrobes and the funny t-shirts. One favorite t-shirt was “Done Adulting For Today.” Indeed!

Did I feel safe? You bet! At no time did I feel threatened or see anyone else who appeared to feel threatened or looked threatening. People were happy. Folks were polite. There was no pushing or shoving…lots of folks offering to take pictures of others, giving each other directions to stages, etc. I did see two or three folks jump the fence to get in near the Lakeshore stage, and I read in a newspaper article there were a few arrests for possession of controlled substances…and one for assault…but I didn’t witness it. And honestly…there were thousands of people there; one assault arrest? Do the math…that’s pretty good.

After the girls had heard the artists they wanted to hear, we were on our way back to our hotel. They talked and talked about how much fun they had and how they couldn’t believe they got to go to Lollapalooza! We then made plans to return next year. I will definitely take friends with me, because it would be so much more fun with friends. And next year, I’ll feel better knowing the girls know their way around.

I feel like this is only the beginning of the music festivals for us now. We’ve already been talking about Coachella. That’s one I definitely want to do, so I hope we can make it happen before she’s off to college. Going to a music festival might sound like a crazy thing for a middle-aged mom, but I wasn’t even the oldest person there…and there were lots of people about my age. I was also a “safe person” for teens to approach; several walked over and talked to me while they waited for friends or tried to regroup. Moms have that affect on teens.

So now I’m already booking our hotel rooms for next year. We’ll purchase tickets for the full weekend next year, and several friends have already “volunteered” to go with us! And next year, I will be prepared with the correct wardrobe. The only shoes I had taken this year were wedges, and I didn’t take any really casual clothes. But next year...it is on!