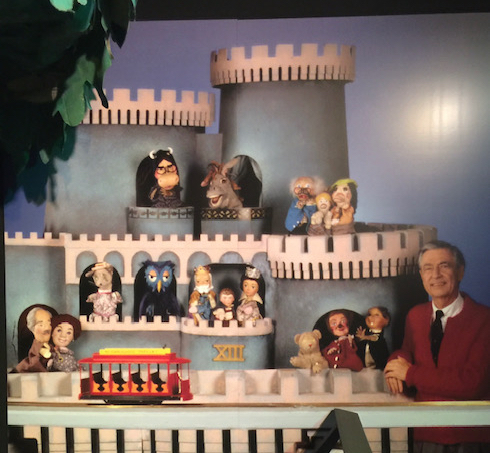 A friend just shared on Facebook a video of Mr. Rogers accepting a Lifetime Achievement Award at the Daytime Emmy Awards in 1997. In his acceptance speech, the beloved Mr. Rogers asks if everyone will take “just 10 seconds to think about the people who have helped you become who you are…the ones who cared about you and wanted what was best for you in life.” And he silently keeps time on his watch…just ten seconds to think of the people who helped you become who you are. You can see a clip here.

I loved Mr. Rogers. It’s no secret. My friends have known that for years. In Pittsburgh a few years ago, I forced everyone in my party to visit the Heinz History Center to see the Mr. Rogers exhibit…some of the pieces from his television show. I was happy. I looked at all of it and thought how much my little girl self would have loved to see it all in person back in the 1970s. Mr. Rogers was a part of my childhood. If you are close to my age, he was likely a part of your childhood too. You likely know the theme song for his show. You likely remember some of the characters from The Neighborhood of Make Believe. Sure, we sometimes made fun of Mr. Rogers and his cardigans and practical shoes, but we all learned something from him.

And as it turns out, Mr. Rogers, in his acceptance speech, was still affecting people. In fact, he’s still affecting us today. That very video made me stop and think about something I hadn’t thought about before…the people who helped me become who I am.

For me, there are many…my parents, my family, some of my teachers, my college friends, other friends…you know, the usual. I won’t name any names, but there are other people who helped me become who I am, and some of them did not do it intentionally. You know who really helped me become who I am? People with whom I had a disagreement of some sort. Seriously. Think about that. When you have a disagreement with someone, it changes who you are…hopefully for the better. And I truly believe that, when I’ve had disagreements with folks, I have been introspective afterward…thinking about where I might have been right and where I might have been wrong. There are also people with whom I had a chance encounter…maybe they helped me carry my groceries; maybe they blessed my day; maybe they stopped me from doing something stupid; or maybe they encouraged me to take a risk I wouldn’t normally have taken. The list is long.

But the list of people who have cared about me along the way? I have a small family, so that list is not particularly long. I have some great friends with whom I will be friends till I die. And I’ve had other friends who aren’t still around, but they cared about me at some point, and I cared about them…and deep down inside, I truly care about anyone who was my friend at one time. Truth. And even if they don’t care about me, they still shaped me in some way.

I’m a firm believer that everyone we encounter affects us and shapes us in some way…maybe it’s a positive and maybe it’s a negative.

So stop and think about the people who have made you who you are. Sure, some of them cared about you. Some of them just affected you in a chance encounter. Be restrospective and introspective. And then, get out and go see A Beautiful Day in the Neighborhood, starring Tom Hanks as Mr. Rogers. Just seeing the movie trailer makes me cry, so when I go see it, I’ll have lots of tissues. I plan to see it within the next few days.