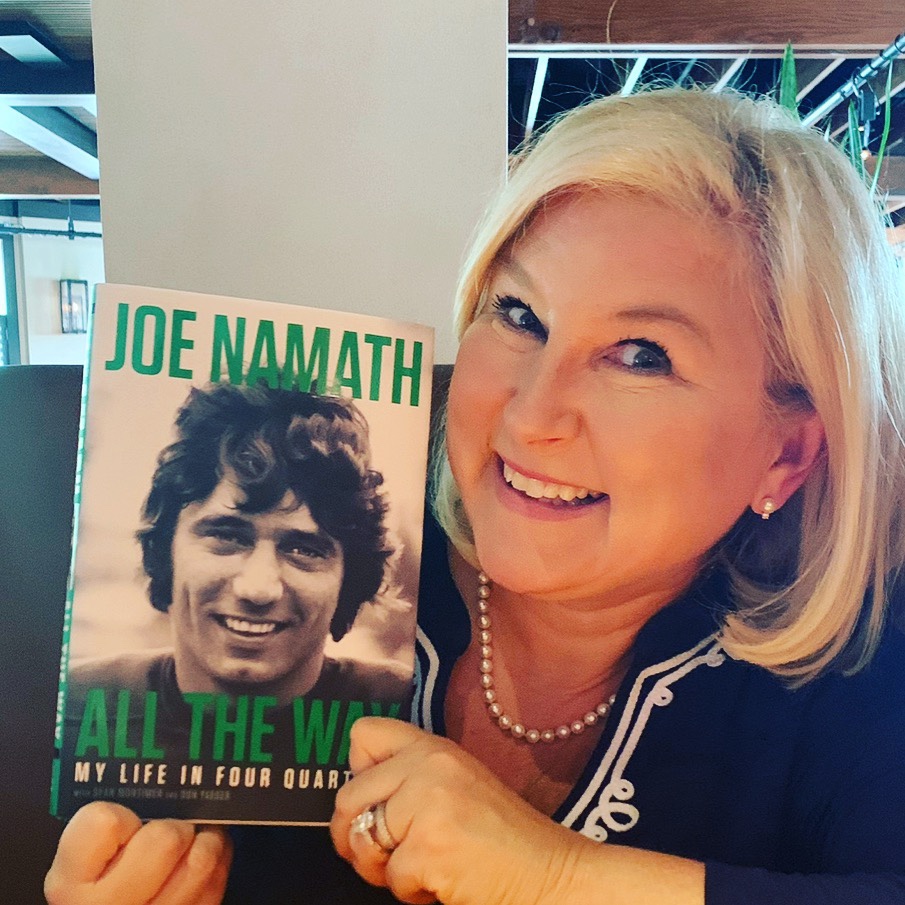 I’ve never met him, but I haven’t given up hope. Maybe one day, if I’m lucky, I’ll get to meet Joe Namath. A few years ago, when I took a crazy road trip through several states, on the way home, I made a detour, just so I could visit the plaque honoring Joe Namath in Beaver Falls, Pennsylvania. It’s right outside the Carnegie Free Library in downtown Beaver Falls, if you decide to go.

Back in November, I wrote a piece about books as Christmas gifts, and one that I recommended was Joe Namath’s latest autobiography, All the Way: My Life in Four Quarters. At the time, it had not yet been released, but I recommended it anyway, because well…I think he is a fascinating person. And now it’s out! It was released this month. Lucky me…my friend, Linda, gave it to me for my birthday. My birthday was Monday, May 27, but I find it fitting that she gave me the gift today, May 31…Joe Willie’s birthday.

I’m not going to pretend to know everything about him. I know Joe grew up in Beaver Falls. I know he went to The University of Alabama and played football for the legendary Bear Bryant. In fact, Coach Bryant said Namath was the best athlete he ever coached. From there, Joe went on to play quarterback for the New York Jets, and after guaranteeing a win against the Baltimore Colts, he led the Jets to win Super Bowl III. *Here’s a little trivia: the first two Super Bowls were also won by a former Alabama QB, Bart Starr, who played for the Green Bay Packers.

While in New York, Joe earned quite a reputation as a ladies man, wore fur coats on the sideline, was given the nickname Broadway Joe, and disagreed with then NFL Commissioner Pete Rozelle over his ownership of Bachelors III, a Manhattan bar. Years later, when I was in my early 20s in 1989, I had the opportunity to spend some time with Mr. Rozelle during an Atlanta Falcons game, and we talked about Joe. I don’t fully understand what transpired between them, but I know that by 1989, Mr. Rozelle had respect for Joe. He spoke very highly of him to me.

When I was a little girl, Johnny Carson was still the host of The Tonight Show, and even though I was usually in bed by 10:30, when the show came on, my parents would let me stay up and watch anytime Joe was one of the guests. Of course, I’m sure much of the humor went way over my head, but he was always smiling and self-deprecating. He had that wavy hair and that sweet smile…he had the X Factor…charisma. And he still has it at 76. That’s how old he is today…76.

I also remember his appearance on The Brady Bunch. I was so jealous of those Brady kids, even if Bobby got Joe to visit by deceptive means. I was green with envy.

When I arrived at lunch today, Linda had my birthday gift all wrapped up with a pretty bow. Her husband went to Auburn, so it never occurred to me that she would give me Joe’s autobiography. As I started to unwrap it, I realized what it was, and I’m sure my face lit up! Fortunately for everyone else in the restaurant, I have laryngitis, so they didn’t have to hear me squeal with joy. As soon as I had it opened, I double-checked the date on my phone, and I told Linda, “I love it! And you gave it to me on Joe’s birthday!” She had no idea, of course, and I could seem like a total stalker for knowing it, but I don’t care.

As for now, I’m sitting on the sofa reading the book already. I’ve read great reviews for it, so I’m sure I’m going to love it. I’m just thankful to Linda for giving it to me. I’ll be celebrating Joe’s birthday by reading about his life. If you’re interested in getting a copy of the book, you can purchase through Amazon here.