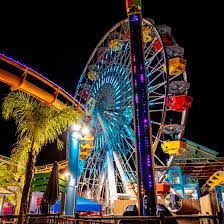 Give the gift of fun!

So, we have all been hearing for weeks on end that we need to shop early this year, because the supply chain is messed up. I have seen a few signs that this might be true, so I’m looking to purchase gifts that don’t have to be shipped here from other countries. Near the top of the list? The gift of fun! Someone said to me recently that I remind them of Tigger from Winnie-the-Pooh’s Hundred Acre Woods. At first, I didn’t understand, so I simply asked, “Tigger?!?” My friend responded with, “Yes, Tigger! You’re always looking for the next fun thing!” Well, I won’t argue with that. And I love to share fun with other people! So why not give the gift of fun?!?!

Here are some ideas:

Just consider the recipient and think of something that would be fun for him/her. A cooking class sounds dreadful to some people (me), but lots of other people would co crazy over it!

The gift of an experience is something that will be remembered forever.

So this year, instead of worrying about whether or not the gifts you ordered are on a ship in the Pacific, give the gift of fun!

I visited the international training center of a cult, and on the surface, everything looked great.

But I’m going to try to refer to it as a “community” instead of a “cult.” I won’t say which “community” it was, but my 21-year-old nephew came into town with a friend over the weekend, and on Friday night, he announced to me that they wanted to visit a cult (he used the word “cult”) on Saturday…and he wanted me to go with them. I had questions, of course. “You don’t want to join the cult, right?” “Why do you want to go?” “How far away is it?” “Is it scary?”

He showed me the group’s website. It looked pretty benign, And it said they welcome visitors, so I agreed to go, and we made plans to leave the next day. I should mention my husband thinks we are all nuts.

Early Saturday afternoon, we got into the SUV and drove over an hour to the address listed on the website. We were excited to see what we would find! Upon arrival, we drove into the parking lot at the front of the group of houses and got out. We walked around looking for people, but all we saw were sheep out front eating hay. One of the sheep had a penchant for magnolia leaves, so we watched them for a while and discussed what we should do.

Ultimately, we decided to go to another road and approach from the back. When we drove into a back parking lot, we saw a woman stick her head around a fence. I asked my nephew’s friend to put down her passenger-side window, and in my best sweet southern voice, I said, “Hey! We read on your website that y’all welcome visitors! We’re just curious and would like to find out what y’all are all about!” Once she decided we were friendly, she offered to show us around. She explained we weren’t seeing many people because Saturday is the Sabbath, and most people were resting.

We followed her into the dining hall/meeting room, which was lovely…clean and nicely decorated. We ran into a couple more friendly people inside who readily introduced themselves. From there, she showed us the barn area, where they had goats and cows. And after that, we walked over to one of the community’s houses, where members of the “community” had gathered outside for music. We were offered tea, and we all took a cup. I thought it was delicious, and my nephew did too, but I noticed his friend was holding hers…not drinking it. I knew she was thinking about Jonestown, so I took the tea off her hands and drank it myself.

We were welcomed with open arms by everyone gathered outside, and we asked any questions we could think of. Are people free to come and go as they please? Yes. If someone leaves the community, are they shunned? No. Do y’all drink alcohol? No. What are your beliefs? How do you support yourselves? I wanted my nephew to ask if they used cannabis, but none of us had the nerve to ask that. I thought I smelled it wafting out of a house at one point, but I couldn’t be sure. And this group believes everyone should work together for the greater good of the community. Every person contributes by working…like bees in a hive. Children are educated onsite. We weren’t bashful…we asked questions. We didn’t ask in a threatening way…we asked in a curious way, which is exactly what we were…curious.

We left after a couple of hours thinking, “This isn’t a cult at all! They’re just a religious commune!” Everyone was so friendly. They were very reserved, but they were friendly. We had no reason to believe they were anything but good folks.

And then, after we got home, we googled the name of their “community,” and that’s when things got weird!

Unbeknownst to us, just last week, the FBI had released from their vault information from a 2013 investigation into this particular group. At the top of the report, it says, “Open investigation based on allegations that children are being sexually exploited.” And somehow, we decided to visit right after the report was released from the vault? We had no idea! In the report, there is testimony from former members of the community with allegations of child labor, sexual abuse, sexual orgies, and drug use. That led us to look at other websites, where we found allegations of community members being held against their will…and more. And honestly, it frightened us. Is any of the “testimony” true? I don’t know, but it was enough to make my hair stand on end.

And it made me a little sad. I thought of the sweet people we had met. Most of them were friendly, but some of them were looking at us wide-eyed, and one of them appeared a little unstable, but we chalked it up to dementia. But after reading everything, I couldn’t help but wonder if some of the wide-eyed ones were desperate to leave. Were they unhappy? Were they being abused? Did they want us to take them with us? Did they want to pass us notes asking us to send help? Of course, that’s all my imagination. No one, at any time, indicated they were unhappy. In fact, most of them appeared very happy.

In hindsight, I’m glad we didn’t google the community before we went, because we never would have gone. I believe there are some good people in that group. Are there bad folks? I don’t know. But I’m guessing that will be my only visit to their commune. We went unannounced, but didn’t see anything suspicious. Of course, my nephew’s friend pointed out that we were really only shown the animals and the interior of one building, which was almost unoccupied at the time, so there wasn’t much opportunity for us to see anything nefarious.

Giving them the benefit of the doubt, they seemed like nice people. Of course, someone else pointed out to me that “of course they were nice! They wanted y’all to join!” Yeah…they probably didn’t want me. I’m way beyond child-bearing years, and I’m sure they could take one look at me and tell I’m way too high maintenance. My nephew, on the other hand, is low maintenance, strong, hardworking, good-looking, musically talented, and artistic. Any cult would love to have him. His friend is pretty and outgoing…they’d love to have a young lady join up, I’m sure. But I would have been a total drain on their system.

And in their defense, the FBI closed the 2013 investigation. Since I never read anything about any arrests, and they didn’t invade the place like they did with David Koresh and the Branch Davidians, I’m guessing they didn’t uncover enough evidence to support the allegations.

Either way, we got out unscathed. If anyone ever tries to hold me at a commune, they will run me off as soon as they figure out I don’t even know how to mop very well!

On our way home, I thought of how happy my parents would be that my nephew was hanging out with me in North Carolina. And I wished I could call them to tell them about the experience…they would have loved hearing about it.