I’m no chef. I can barely even call myself a cook.

But I love reading Hungry Girl cookbooks and magazines, and I love the website, http://www.hungrygirl.com. I’ve written about the site before. I’ve learned a lot about ways to swap high-calorie/high-carb foods for lower calorie foods over the years, and one of my favorite swaps is veggie noodles.

I was slow to buy into veggie noodles. I love my pasta.

But recently, I started to question whether it’s the pasta I like or the stuff that goes with it. Red sauce? I love it. Tomatoes? I love them. Bolognese? Yes, please! I even like Alfredo sauce, but it’s not my favorite.

So I started experimenting with some of Hungry Girl’s veggie noodle ideas. For months, I ate zucchini noodles. I didn’t buy them in the grocery store. I actually purchased the zucchini and brought it home to make my own noodles. I bought a handheld veggie spiral slicer, and I stayed busy making my own zucchini noodles. The first few times I ate them, I was so proud, and I liked them…but that changed. For some reason, the zucchini noodles just didn’t do it for me. I gave up.

Then a few weeks ago, after reading some info on Hungry Girl about spaghetti squash, I went back to the grocery store and picked up a couple of spaghetti squash. I will openly admit that I had no idea what a spaghetti squash looked like. I actually had to read the labels on the produce shelves, but I found them. They look like the gourds they are. I grabbed two and brought them home. Following instructions I found online, I cut them, cleaned them, brushed on a little olive oil and sea salt, and baked them, face down, in the oven. After I took them out of the oven and scraped the “spaghetti” out of them, I knew I had found my true veggie spaghetti love. 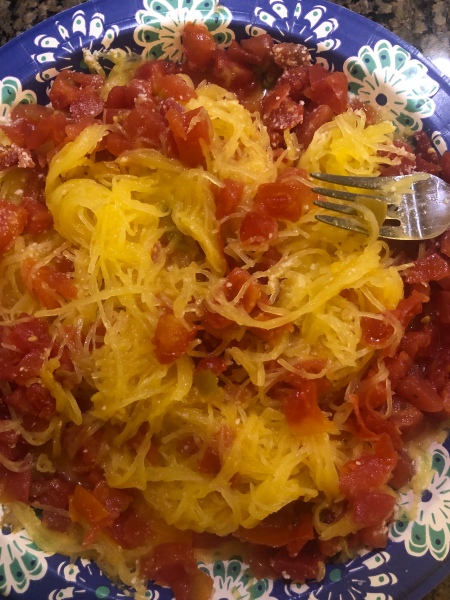 The difference in the zucchini and the spaghetti squash? The spaghetti squash absorbs the flavor of its pairing. The zucchini…not so much. There’s something about the texture of the zucchini that prevents it from absorbing the other flavors, but the spaghetti squash texture is perfect. It absorbs the flavor of tomatoes, onions, Alfredo sauce, red sauce, garlic…whatever I put with it! In fact, the texture of it is so perfect that I have actually fooled my teenager with it. I served it to her once with chicken, butter and sea salt, and she didn’t even realize she was eating squash instead of traditional pasta.

That is a win!

After cooking it in the oven several times, I tried cooking it in my Instant Pot. I got the directions from the Hungry Girl website here. Even before trying it, I knew it would be a little lower in calories, simply because it eliminates the need for the olive oil. I wondered how that would affect the flavor. But I wasn’t disappointed! I was thrilled! The Instant Pot method was super easy and super tasty! Hungry Girl wins again!

So now I need to get creative with the spaghetti squash. I’ve prepared it with marinara sauce, Alfredo sauce, Rotel tomatoes, and even chicken/butter. Taking a look at the Hungry Girl site, I see lots of different recipes I need to add to my repertoire. Spaghetti Squash Shrimp Scampi? Yes, please! Spaghetti Squash a la Vodka? Bring it on! To see them all, click here.

Try cooking some of them without telling your family, and see what kind of reaction you get! My super-picky teenager didn’t even turn her nose up at it!